You will find the following information on this page:

What are the symptoms?

Which body parts are affected?

How is it treated?

Acne is one of the most common skin diseases. Up to 85% of the population are affected within their lifetime. Symptoms are pustules, pimples and blackheads. Due to hormonal changes, teenagers are particularly often affected. But adults can also develop this condition. It is called adult acne if the disease persists beyond the age of 25. In addition to adolescents and adults, the disease also occurs in rare cases in babies and small children. It manifests itself in many ways and the underlying causes are just as varied.

In most cases, the symptoms can be successfully controlled with over-the-counter medicines. However, there are also severe cases that require treatment by a dermatologist. The following article is dedicated to the most common form, acne vulgaris.

Acne vulgaris usually has hormonal causes. The male sex hormones, so-called androgens, are responsible. During puberty, these hormones are increasingly produced in men but also in women. Since men are more affected by the release of androgens, the skin disease develops relatively often in them and has a more severe course than in women.

Androgens stimulate the production of sebum. During the hormonal changes in puberty, the cornification of the sebaceous glands is disturbed, which prevents the sebum from flowing out freely. It accumulates under the skin and blackheads and pimples develop. Excessive bacteria that feed on the sebum can cause the blackheads to become inflamed and pimples to develop. Hormone fluctuations, however, do not only affect teenagers during puberty.

They also occur frequently when discontinuing the contraceptive pill, during pregnancy or during the menopause and cause an outbreak of the disease.

Acne can occur due to hormonal fluctuations at all stages of life and at any age. But hormones are not the only cause. Hereditary predisposition, psychological strain and stress also promote an outbreak. Furthermore, greasy face creams, certain foods or medicines can block the excretory ducts in the face and other parts of the body and cause inflammation. External influences such as humidity, cigarette smoke and scratching can aggravate the symptoms.

They also occur frequently when discontinuing the contraceptive pill, during pregnancy or during the menopause and cause an outbreak of the disease.

What are the symptoms?

Acne is noticeable through blackheads and/or inflamed skin areas with pustules. In some cases, large and painful lumps can develop, which can lead to scars. 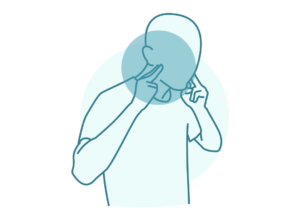 Which body parts are affected?

The face is usually affected, especially the so-called T-zone (forehead, nose, chin), but the cheeks can also be severely affected. Symptoms can also appear on the décolleté, neck and back.

Are you suffering from acne?

How is it treated?

The treatment depends on the form and severity of the disease and the age as well as the life situation of the person affected. Other factors such as allergies or the sensitivity of the skin are taken into account. In severe cases, a dermatologist should be consulted to find the right therapy and reduce the likelihood of the disease persisting for many years and leaving scars. Treatment requires patience, because even with the best therapy, it can take a long time for the disease to heal.

Acne can be treated externally and internally and an individual treatment concept is created. External therapy is carried out with cleansing products, antimicrobial agents and moisturising care. If this is not sufficient, various preparations can be used that inhibit sebum production and have an anti-inflammatory effect, such as short-term glucocorticosteroids, antibiotics, vitamin A derivatives or azelaic acid. For internal therapy, the patient receives medication in the form of tablets.